An air compressor is a tool that continuously sucks the surrounding air in order to mechanically squeeze it through internally moving components. Air suction of the highest magnitude is what creates a usable force that can power all sorts of air tools, including impact wrenches and pneumatic drills. The cycle is completed once the maximum pressure per square inch (PSI) is reached by the compressor.

Anything that requires motorized action, the air compressor can power with the mechanical action of pressurized air. Energy technology has indeed come a long way, and it's encouraging to not only be limited by gas, electricity, and batteries for powering certain tools. When judging which is the best air compressor overall, it's mostly about understanding the cubic feet per minute (CFM) relative to the Pressure Per Square Inch and the maximum PSI then going from there. 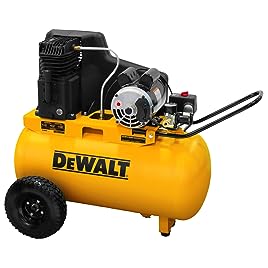 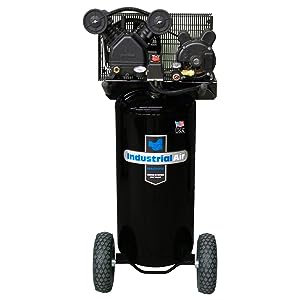 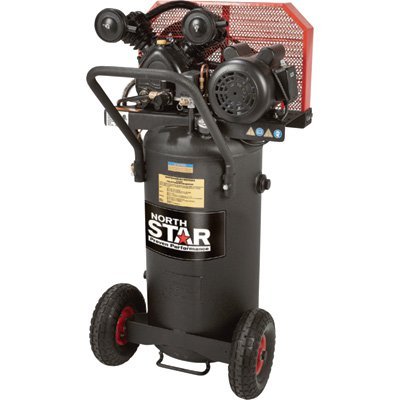 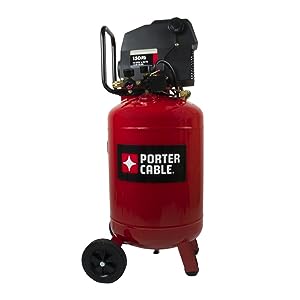 It features a ¼-inch NPT quick coupler, a quick drain valve, and two pressure gauges. It's also easy to transport thanks to its onboard handle and wheels. It's also backed by a 2-year warranty to boot. However, some units have issues with quality control that has led to its lower score, such as some units being noisy and leaking air.

Specs-wise and ratings-wise, the DeWalt DXCMPA1982054 is a winner through and through. This 20-gallon air compressor might be the second heaviest "portable" compressor of this list at 166 pounds (only the NorthStar's 205 pounds is heavier), but with the added weight comes welcome benefits like a jaw-dropping air flow rate of 7.0 CFM at 40 PSI and 5.7 CFM at 90 PSI.

The extra baggage also gives it extra mustard when it comes to its maximum pressure of 155 PSI (the only one that comes close is the  Porter Cable PXCMF220VW at 150 PSI, but its flow rate is the second worst in this list). The tank even comes with pre-attached pneumatic tires to maximize its portability. Furthermore, the 120-volt dual voltage motor can be converted for 240-volt applications if required, ensuring better versatility.

Impressively, the Industrial Air IL1682066 has a solid air flow rate of 6.2 CFM at 40 PSI and 5.3 CFM at 90 PSI, making it the second best compressor on the list in those metrics. It's second only to a DeWalt at that, which is no easy feat. It has a standard maximum PSI of 135 as well. The V-Twin cylinder is made of cast iron and comes with an oil-lubricated pump to boot.

120-volt motor can be adapted for 240-volt applications just like the DeWalt unit. The pneumatic tires also help move the 159-pound tank around. It also includes a quick connect air outlet, tank and working pressure gauges, and quick-set regulator. However, some customers had issues in terms of generator compatibility. There were units who couldn't run and had a bad electric motor.

On one hand, the DeWalt air compressor got several perfect scores across multiple pages of it on Amazon. On the other hand, it's usually reviewed by a handful of customers on each page, thus filtering out potential criticism from a larger amount of verified users. Nevertheless, in terms of raw specs like CFM and maximum PSI, the DXCMPA1982054 is on a whole other level.

What's not to love about the 2 HP NorthStar Belt Drive Vertical Air Compressor? Although it's the heaviest of the compressors on this list, it makes up for it with a decent airflow rate of 6.0 CFM at 40 PSI and 5.0 CFM at 90 PSI as well as a standard maximum pressure of 135 PSI. Its 2-cylinder tanks are made of cast iron and use a single-stage pump. It also claims to have 20,000-hour bearing life.

In light of its excellent airflow rate, the NorthStar thusly fills rather quickly. Its main claim to fame though is its quiet operation. You can even rewire it for 230 volts from its standard 115-volt operation with electrician assistance. At least one customer had gotten a less-than-satisfactory unit with a crushed safety cage as though it's been dropped on its head. They had issues getting a response from the shipper and supplier as well.

The Porter Cable PXCMF220VW 20-Gallon Portable Air Compressor shines in terms of specs, with abilities comparable to the best compressor on this list, the DeWalt DXCMPA1982054. For example, it has the second highest maximum PSI at 150 PSI. It also compares favorably to the porter cable 30 gallon air compressor in almost every aspect save for the higher gallon capacity.

Its wheels are semi-pneumatic instead of pneumatic but it comes with rubber feet for better stabilization when it's in use. However, its flow rate is the second worst on this list with 5.0 CFM at 40 PSI and 4.0 CFM at 90 PSI (the worst one being WEN 2202). It could've gotten higher ratings if only its UL and CSA certification meant that it'd have a more consistent quality control service on all the units the manufacturer ships out.

What Is an Air Compressor?

An air compressor is a device that puts out pressurized air for various applications, from powering impact wrenches to nail guns to plasma cutters to spray paint machines (so you won't need to buy loads and loads of aerosol spray paint cans). It's a regular resident of many a dentist office or garage as well as local car washes, the paddling pool, and huge factories. Manufactured goods depend on the scroll air compressor as well to ensure their proper assembly and deployment.

Cubic feet per minute or CFM is how the overall air volume of the machine is measured, thus making it the most important factor in choosing the right compressor for your power tools' needs. There are quite a number of types of compressors to choose from. This and the PSI establishes the overall capacity of the air compressor in terms of how much pressure it releases and its overall air volume.

Gas technologies such as the air compressor don't only make use of the surrounding air in order to work. Gases such as nitrogen, methane, and oxygen can also be compressed or pressurized for medical or industrial applications. However, the most commonly bought air compressor type in retail for everyday consumers is the type that suctions air from the Atmosphere of Earth. Gasoline or electricity, meanwhile, is used to power the compressor itself.

You should also scope out the material used on your compressor of choice as well as the projected life expectancy of the compressor you're paying for. Air compressors have warranties that ensure a refund or replacement depending on the warranty issued for the device. Some might even have a lifetime warranty or a warranty length matching its expected lifespan.

Should you get a 20 gal vertical air compressor or a 20 gallon portable air compressor? It depends on your needs. If you want to have a basic understanding of this technology, then read about the different air compressor types below and choose between them on which works best with your specific power tool.

A reciprocating piston compressor is the most widely used type of compressor. It has an internal crankshaft drive just like the engine of your car. Furthermore, it uses a back-and-forth motion in order to create the vacuum that sucks the surrounding air around while retracting and pushing the air into the tank as its extends.

There's friction and wear-down happening on the internal components of the compressor because they're moving parts. They are in contact with one another, so it runs louder and hotter than other air compressor types. Nevertheless, newer technology such as the dual-piston and oil-free compressor reduce noise and overheating linked to this piston-type device.

As for the rotary air compressor, it's known as one of the auto industry's trusted workhorses. It uses rotary screw tech that was introduced for heavy-duty applications that need high-power outputs for extended periods of time. These compressors are like supercharged hotrods in that they're ideal for maximum air intake and payout. As its sealed chamber receives the air, this gas is squeezed between two rotating screws.

The screws are helically opposed rotating screws; one male, one female. As inter-meshing happens between the screws, they decrease trapped air volume while delivering the gas in a compressed form and at the right pressure level. Compared to reciprocating piston air compressors, this rotary air compressor type have oil-sealed internal parts that don't touch and have fewer moving parts. It requires less maintenance over time.

Scroll compressors have rotating spiral-shaped circular pieces that spin around one another in order to compress gases. One scroll piece doesn't move and is affixed. Meanwhile, the other scroll piece fits inside this unmoving scroll and moves in tight circular motions without the need of rotation. This tech is available everywhere and can be found in various applications all over the world.

Scroll tech is used in high-efficiency turbo vehicles and refrigeration electronics manufacturing. Furthermore, these compressors are able to produce industry-standard, ISO-approved air that's considered the cleanest for all air compressors. Such rating and features make them ideal compressors for use in food industries, dental industries, pharmaceutical industries, and electronics industries because of their 100 percent oil-less, quiet operation.

Here are the most frequently asked questions regarding the air compressor.

1. How big of an air compressor do I need to run air tools?

The answer to that is 20 gallons for most consumer-grade applications. Obviously, you need more if you wish for industrial-grade results.  A 20-gallion air compressor is usually enough to fulfill your needs. You can go upwards to 30 gallons. Specs-wise, ½-inch impact wrench requires at least a 50 CFM compressor with 90 PSI or a compressor that delivers 6.25 to 7.5 CFM at 90 PSI. If you're using multiple tools, add the CFM rates together to see if the compressor can handle it.

2. How to use a 20-Gallon Air Compressor

To use an air compressor, just plug it to your air tool, turn the compressor on, and turn the air tool on. It works by air suction of the surrounding air or gases then mechanically squeezing the air through internally moving components, leading to the powering of air tools with a usable force. The duty cycle is then completed once the maximum air pressure (measured in PSI) is reached.

3. How long can a 20-Gallon Air Compressor Tank Last?

Air compressors are quite the worthwhile investment because they can last you between 20 to 30 years or a gallon a year by their capacity. That mean you can get 40,000 to 60,000 hours of work out of them and some even have warranties as lengthy as those of toilets that lasts decades. If your compressor doesn't last nearly as long as that, you've been gypped.

Air compressors, particularly the 20-gallon variety, are quite the dependable devices that make tough jobs easy without you depending on a motor or electrical socket to work. Ratings-wise, the front-runner for the best air compressor available for consumers in 2019 is the DeWalt DXCMPA1982054, followed by the Industrial Air IL1682066, NorthStar Belt Drive, Wen 2202, and Porter Cable PXCMF220VW. 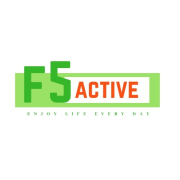 Tina Smith
Hi everyone! I am Tina who created this blog. I really love to write blogs because it helps me convey my ideas, thoughts, and advice and share my personal experiences with other people. Hope you like it!
Previous

The Best 60 Gallon Air Compressor: How to Find the Right One What is the best tiller for breaking new ground? If this question has suddenly popped ...
By Tina Smith
August 18, 2020 Top 5 Best Shoes for Tarsal Tunnel in the Market today

What are the best shoes for tarsal tunnel syndrome? Most probably, this is one of ...
By Tina Smith
August 18, 2020 Have you been diagnosed with plantar fasciitis and you have no idea on how to ...
By Tina Smith
August 17, 2020 Ultimate frisbee is definitely one of the most popular contact sports these days and like ...
By Tina Smith
August 13, 2020

What to Avoid When Choosing Body Wash & Soap For Sensitive Skin

What Should I Look for When Buying Ice Fishing Boots?